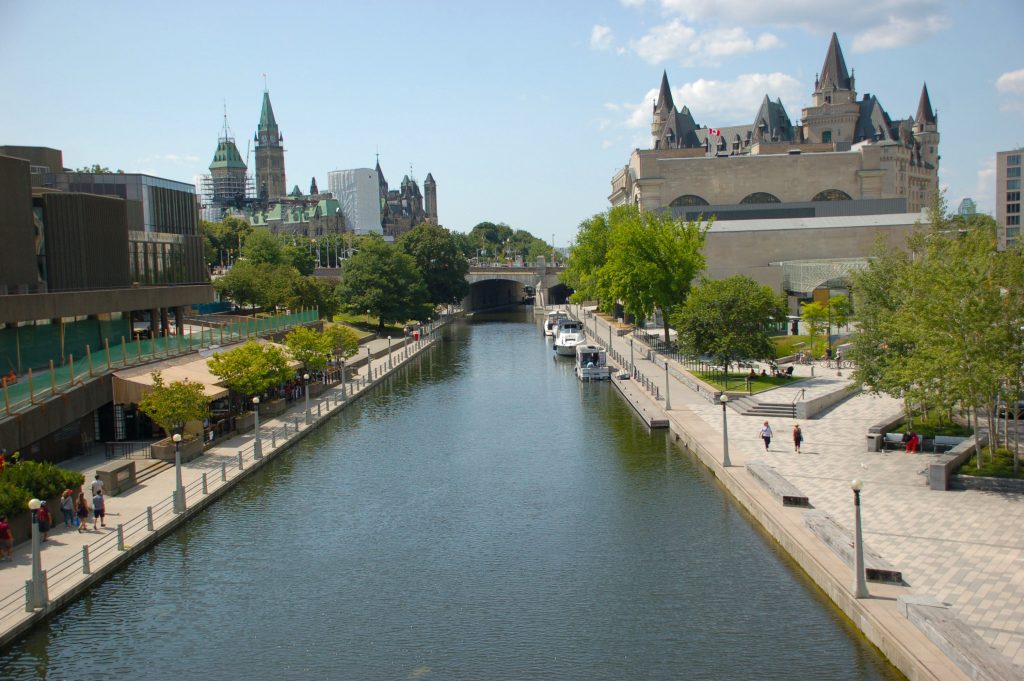 Canada is a hugely respected country by the rest of the world. It is seen as a place of culture, tolerance and natural beauty. However, not everyone knows the capital of the country. The most common cities people associate with the country are usually Vancouver, Toronto and sometimes Montreal due to the French influence. Surprisingly, none of these cities are the capital of the country despite being internationally relevant.

What is the Capital of Canada?

The capital of Canada is Ottawa, which is located in Ontario—that is, the province directly above the Great Lakes and the US states of Minnesota, Wisconsin, Michigan, Ohio, and (part of) New York. Not everyone thinks of the city of Ottawa when mentioning Canada.

Confusingly, while the capital city of Canada (Ottawa) is located in the Province of Ontario, it is not the capital of Ontario itself. This status belongs to Toronto.

It’s reasonable to not really think of Ottawa first when trying to remember Canadian capitals. After all, Toronto is much larger and Montreal is an international city with ties to Europe. Vancouver is a major city with a very strategic port, and Quebec City is centrally located.

Well, as it turns out, choosing a capital city is more complicated than pointing to the biggest city on the map.

The location of the capital city of the Province of Canada changed six times in its 26-year history. During this period Canada witnessed ongoing disputes over what the capital of the new province should be; contenders included Quebec City, Toronto, Montreal, Kingston, and finally Ottawa. Notably, the capital moved from Montreal to Toronto in 1849 when rioters protesting the Rebellion Losses Bill burned down Montreal’s parliament buildings.

Each of these cities held the title of capital of Canada for varying lengths of time. Here is a

chronology of exactly how the capital city of Canada changed in just two and a half decades:

Why is Ottawa the Capital of Canada?

Choosing a capital city is not an easy affair. Should it be in the centre of the country? Should it be the largest city? Who decides where a capital should be? There are plenty of factors that go into it. To understand why we need to have the historical context of Canada and its previous colonisation.

The History of Colonial Canada

Colonialism really began in the mid-1500s, when Jacques Cartier claimed the land for France and its king – Francis I. It was in the 1550s that the land became known as the Anglicised Canada – after the Iroquoian word Kanata, or “village.”

Canada remained under French control for over a century when King Charles II of England gave exclusive trading rights over the Hudson Bay to England’s Hudson Bay Company. The growth of trade was accompanied by the growth of the existing English settlements in the area, and before long, the English colonies were larger and more prosperous than the French areas of Canada.

By the 1700s, Great Britain was interested in gaining as much control of North America as possible, and their armies defeated France in 1759 at the Battle of the Plains of Abraham, which took place near Quebec City.

From that moment on, Canada was a British colony called the “Province of Quebec,” and British shipping would dominate. The British takeover would play an important role not only in balancing relations between the French and English-speaking Canadians but also in deciding the capital in relation to another former British colony to the south – the United States of America.

Why Was Ottawa Chosen?

While Canada is a relatively young country, the capital has been decided for a while now. In 1857, there were a few cities competing to be the capital city. To settle it, Queen Victoria chose Ottawa. Her choice of Ottawa—a fairly small and newly incorporated city—surprised many. Why did she do this?

There are old folk tales about how she made the choice: that she did so by sticking her hatpin on a map roughly halfway between Toronto and Montreal, or that she liked watercolours she had seen of the area. Whilst this is a fun image of the events, there were some political and economic reasons behind it.

Ottawa had a lot of promise: it was starting to experience economic growth and was home to an impressive railway system; it also had a long history of trade due to its location near several rivers. Alongside this, it was centrally located between the cities of Montreal and Toronto and was along the border of Ontario and Quebec (the centre of Canada at the time). It was also far from the American border, making it safer from attacks.

The story of being halfway between Toronto and Montreal may be part of the old folk’s tale but  there are political reasons behind it. Toronto and Montreal represented the English and French parts of Canada. These two cities were the largest in Ontario and Quebec, which were at the centre of Canada in the mid-19th century. Picking Ottawa was a good compromise, as the Queen did not want to appear to favour one major city over the other.

But not everyone agreed with the queen’s pick, which led Toronto to remain the capital for another two years followed by Quebec City for another six years. It wasn’t until 1866 that Ottawa was officially designated the capital city of the Province of Canada and began to hold Parliament.

Ottawa: Home to the Government of Canada

Similar to the USA, Canada has chosen its capital to be separate to their biggest cities. This allows the head of the government to be separate to economic of cultural areas. Ottawa is the political capital of Canada, where the house of commons is located and where most federal politicians will reside.

What is There to do When Visiting Ottawa?

As it is the political capital, going to see the house of commons is a must. The magnificent Gothic revival Parliament Hill sits in the middle of the city centre overlooking the Ottawa River. The building is home to the Parliament of Canada but is also a major tourist attraction.

There are three buildings that makeup Parliament Hill, as well as an expansive formal garden. The grounds of the complex are the site of numerous national celebrations, demonstrations and shows. Tours are available multiple times throughout the day in both English and French. They last anywhere from 30 to 60 minutes, though you must turn up at 9 am to reserve your spot for the day.

There is so much Canada has to offer to tourists who love both natural beauty and cultural sights. With the new eTA Canada system, it’s never been easier for someone to get access to Canada. Whether you need an eTA Canada Visa for UK Citizens or just an international Canadian visa, we are on hand to help.